skip to main | skip to sidebar

Brought to you courtesy of the red white and blue !

The pic must be fake, but I dig it, cuz I am one of them blood-thirsty, war-mongering, patriotic, gun-toting, flag-wavin', Bible-thumpin', redneck hillbillies your President is always warning you about.

And since he won't provide me a picture of my own, I am gonna take what I can get. 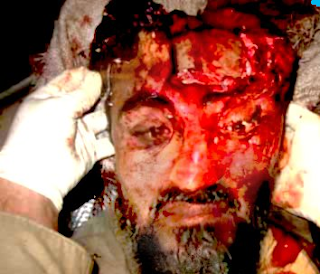 Now then, I feel much better.

Not quite as good as I would feel if what's left of this head was on a spike at Ground Zero, but better nonetheless.

And speaking of the Pussy-in-Chief refusing to show us the picture, is anyone else pissed off that this same mother fucker did not worry one fucking bit about offending Muslims or inciting violence when he ordered the release of 2,000 pictures of Abu Ghraib, but now suddenly he's all concerned about Muslim sensibilities?
Posted by MissTammy at 3:53 PM